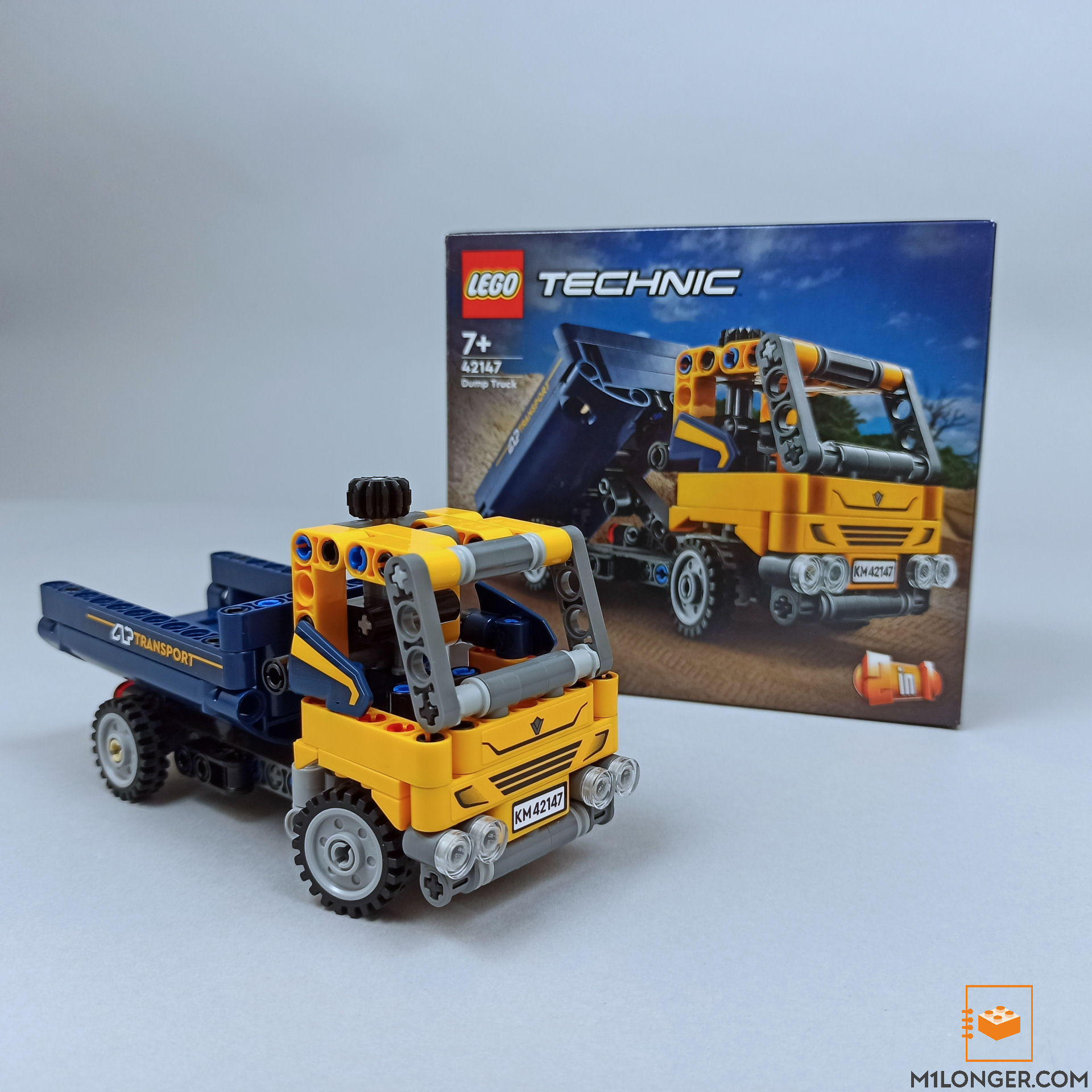 One of the two smallest Technic sets in first wave of 2023 Technic sets. Pretty cool little set, with unusual colour scheme. Bought from a seller, not provided by LEGO.

The box shows the A model on front, B model (an excavator) on the back, and wheel in 1:1 scale on side.

Few words about the parts:

This set comes with brand new Technic connector (Technic Cross Block 1 x 3 (Pin/Pin/Pin) with 2 Pins, number 2393), similiar to the 48989 connector, yet with only two pins. This allowed to have much better ground cleareance in such small model.

As you can see here, placed on 42102 improved the clearance greatly, when compared to connector used widely for steering:

It also includes two brand new small panels #7 & #8 , which are shortened version of existing ones. The main difference is lack of round pin holes, there are only cross axle holes. A pair in Dark Blue:

62531 Technic, Panel Curved 11 x 3 with 2 Pin Holes through Panel Surface is Dark Blue is exclusive for this set. There are two in the set.

There are also few parts that have been not seen for years in Bright Light Orange.

Both 1×3 and 1×5 liftarms in Bright Light Orange were available in past few years.

There are two instruction booklets, both used while building the main model. Really odd decision, because 42148 comes with instructions in same page size, yet as a single booklet.
There’s also a small stickers sheet, stickers are mostly used as detailing on the cab.

The build is pretty straightforward, with much more instruction steps than it needs

The build starts around the front axle and steering mechanism. It’s a really bizzare contraption, working mostly by using slack between parts (liftarms, new connectors and pins without friction). But I must admit that it works smoothly.

Rear part of the frame includes the tipper bed hinge and taillights.

After making the foundation for the cab and rear axle, we finish the cab itself. Both “doors” have to be slided from sides to pins protruding from cab on both sides.

Similiar move has to be done with lever responsible for dumping.

Let’s stay with the front part for a while.

The biggest issue I see with this set is usage of stickers for grille. You need to line three stickers, each on different liftarm, to have decent looking Truck. Adding two small triangle stickers on doors in not convienent either.

There are no side mirrors and anything inside the cab. But it’s a standard in those small sets.
Lower edges of doors are made with few system parts, with visible studs pointing to the ground.

The bed has no tailgate, but it can be easily fixed with adding few parts.

Dump bed mechanism is a simple lever, that locks in position when the bed is raised.

Thanks to new connectors in the steering mechanisms, this model has finally more than few milimiters between chassis and ground:

I must admit that playing with this set is quite pleasing. Steering, even if made in a very odd way, works as it should. Dump elevation works without a problem too.

You can’t expect too much for 10€ range, but this model gives a fair functionality for that price. And four new pieces, including one recolour.

A 30 year old LEGO fan, who sometimes build something. 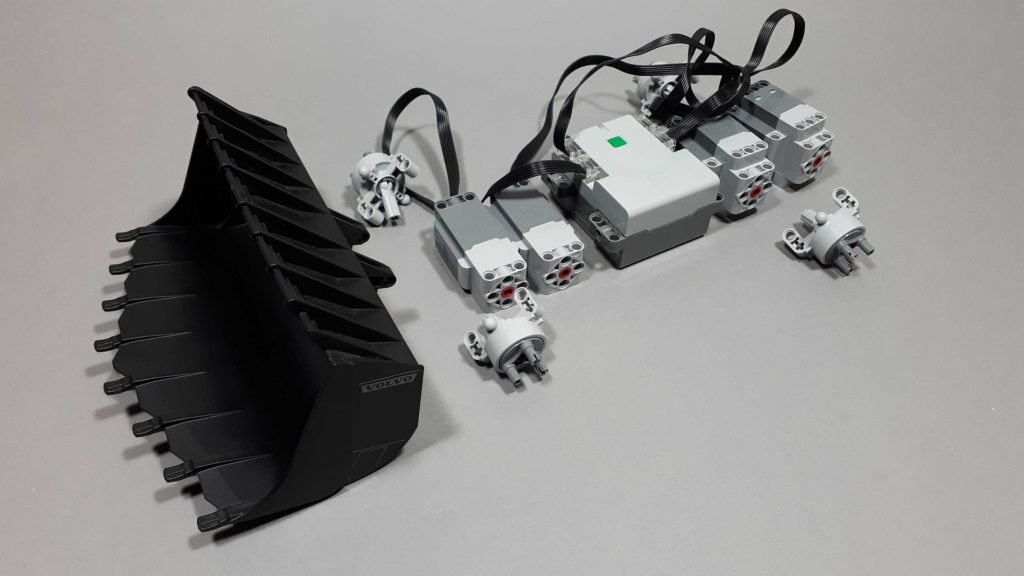 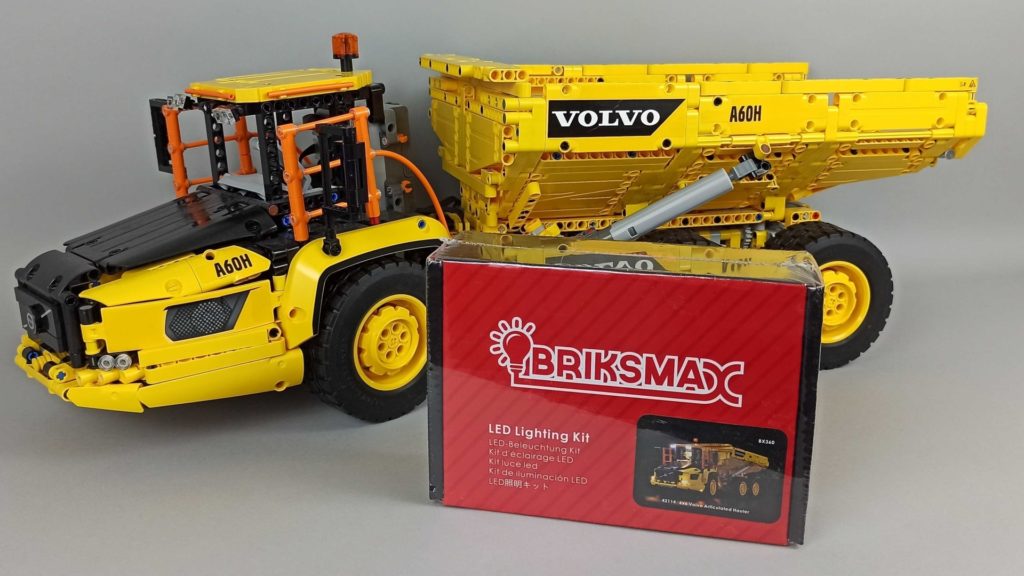 Time to sort those abominations I'm taking a brea

Spider-Spiderman I have bought one of the magazin

42122 Telehandler. Link for instructions in my pro

Need some help with snow removal? Another #flashb

60324 Material Handling pack After requests about

42122 Telehandler WIP A proof of concept at this